Happy Wednesday from your resident veg! If you didn’t already know – I’m a proud vegetarian inching my way to complete veganism. (Insert joke about how do you know if someone is a vegetarian – they’ll tell you – here.)

I started phasing out animal products for health reasons – endometriosis to be exact, but knowing what I do now I would 100% stay vegetarian even if I knew that my endometriosis was completely healed and I wouldn’t be negatively impacted in any way.

Going vegetarian wasn’t easy for me, I was “mostly” vegetarian for nearly four months before I finally committed, and even after that I cheated maybe once a month. Now I’ve only had one unintentional slip up since the new year (that I know of) and I’ve even helped a few of my friends cut meat out of their diets, too.

When I was looking for resources on how to go vegetarian I had a lot of trouble finding blogs or videos that didn’t shame me for not being vegetarian already or feel preachy. In the year since I started my research I’ve since found a few favorite vloggers and bloggers that are sweet and never preachy – but I didn’t think it’d hurt to add one more positive resource on making the switch to the interwebs. 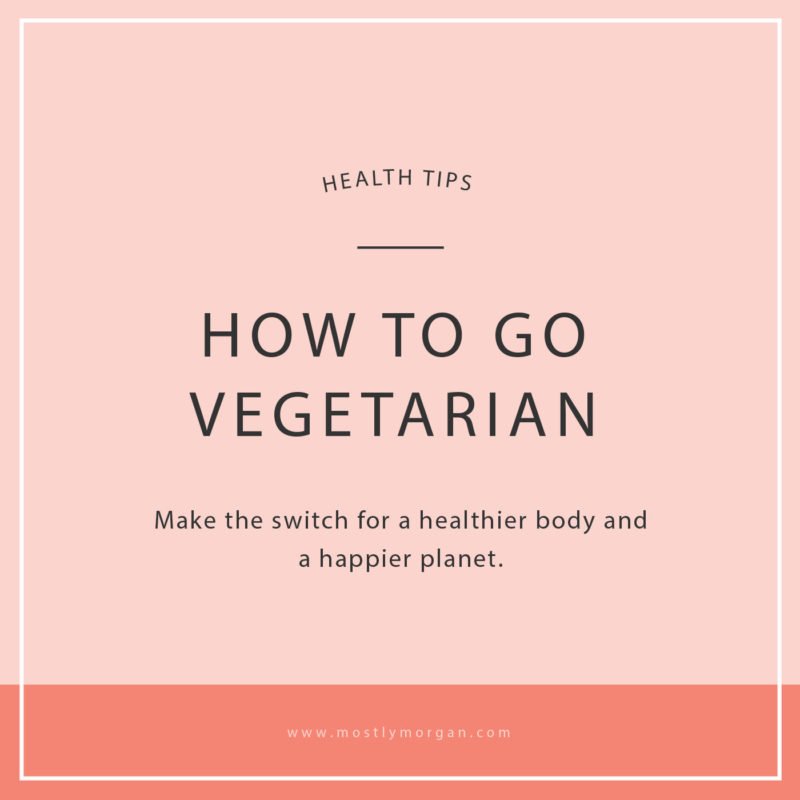 Because people are going to ask. A lot. You might be choosing to make the switch for health reasons, or maybe you’re an animal lover and want to stop contributing to their suffering. No matter your reason, keep it in mind when you’re craving meat or considering cheating and especially when people are demanding and explanation. (Not that you owe them one, but they’ll all want one.)

If you just want to make the switch and don’t have a solid reason, here are some great benefits of switching to consider:

How to stop eating meat

There are going to be people who say things like, “Well if you really cared about helping the animals you would quit cold turkey.” or “If you slip up you must not be a ~*ReAl*~ vegetarian, anyway.”

What I say is: Everyone’s journey is different and some people find giving up meat easier than others.

For me, it took a few months and that was OK.

Should you quit all at once or little by little?

This one is totally up to you. I tried to quit all at once more than once and it just didn’t work out for me. I’d do good for a week and then I’d smell a roommate cooking turkey or a friend would ask if I wanted to get sushi and I’d slip.

Other people make the decision to quit and never touch a piece of meat again.

I do think everyone should try to go cold turkey because the worst that can happen is that you’ll slip up.

If you find that, like me, you can’t just quit then you can start phasing things out little by little. This is what it looked like for me:

Now I know there are other types of meats I didn’t officially cut out ceremoniously like the other types, but I rarely if ever ate meats like turkey or lamb so I didn’t need to cut them out anyhow.

I quit meat, what now?

If you’re used to eating a traditional western diet, your dinner plate probably was anywhere from 1/3 to 1/2 full with meat, and it’s hard to figure out what to replace those staples with. When coming up with veg friendly meals, it’s important to keep a few things in mind:

A few of my favorite dinners

What if I have a craving for meat?

People always ask me if I ever crave meat and I honestly can say that I don’t. Whenever someone mentions hot wings I think I want them, but then quickly realize I just want hot wing sauce. Preferably on popcorn. #Yum.

But in the early days I definitely had cravings and I combatted them mostly by imagining myself biting into whatever it was I was craving. Even just a week or two after quitting meat, the idea of biting into flesh disgusted me, even if I was craving the flavor.

Veg friends have given me mixed verdicts on whether this is true for them or not, so if that doesn’t work there are other options.

Think about why you’re going vegetarian. If it’s to clear your skin take a peak at your progress. You don’t want to lose that, right? Or if you’re doing it for ethical reasons think about what a poor animal has to go through to get to your plate. (If you don’t know, documentaries like Cowspiracy and Food Inc. will open your eyes and break your heart.)

People are judging me

Believe it or not, I used to be embarassed by being a vegetarian and I’d avoid bringing it up unless I absolutely had to. Now, I’m happy to talk about it, but I still have people who act like I just told them that I like to eat dirt and daisy petals and nothing else when I tell them I’m vegetarian.

The best thing you can do is just disengage with these people or sarcastically agree and move on, but if they can’t drop it, here are a few of the most common arguments that I hear and how I refute them if I must argue:

Feel free to leave them in the comments in case anyone has the same question you do, too! I’ll do my best to answer as quickly as possible.